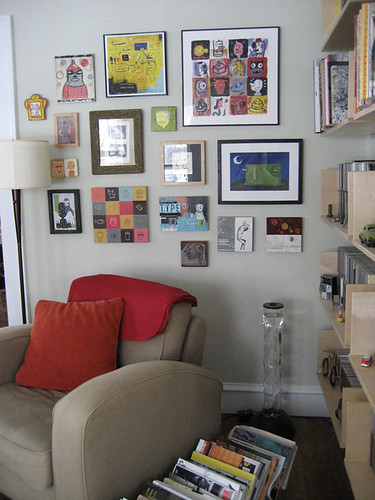 Among my earliest memories is a photo of one of the ships that my dad served on during World War Ii while he was in the U.S. Merchant Marines. It hung just to the right of the front door, the last thing seen when we left the house.

There weren’t a lot of other items on the walls of that first house. For a few years, Mom used to check framed prints out of the library for six months at a time so that she could hang a picture above the sofa which was positioned against the wall with the largest empty area, uninterrupted by windows or doorways. Many of those prints had a religious theme, appropriate since it was under those prints that we sat each morning as Mom read from a family devotions book as part of our preparations for school.

Years later, after each my siblings and I had moved away, what appeared on the walls of my parents’ house changed considerably.

Some items appeared because of the passing of an older member of the family. A large framed photograph of one of my father’s uncles in his World War I uniform covered most of the wall at one side of the hutch in the dining room. This uncle, my father’s namesake, died a few months before my father was born. On the other side of the hutch, a silk-embroidered picture of a building in China hung, an item another of my father’s uncles had brought home from Shanghai where he for nearly 20 years.

Some items were pictures or decorative items they chose, including souvenirs from their travels. But more were gifts from their children: souvenirs we sent them from our travels or that we felt they would appreciate as much as we did.

From that first photograph of my father’s ship to items removed the last day before the house was sold, items on the walls of their home had sentimental, not intrinsic, value. While my mother probably had a specific reason for selecting each of the library-framed items of my early childhood, those stories weren’t obvious. But the story of each of the items on their walls in later years were known to us. And that is true of the objects that adorn the walls of our home as well. Framed photographs of camels and desert scenes, framed post cards of historic or simply picturesque buildings, and framed Bedouin jewelry from a half dozen countries form a large portion of what can be found on our walls, each of them representing one of the countries we have lived and worked in. Paintings – lots of paintings from Moldova and from a time when the prices were so low we didn’t need to ask the cost before selecting six at a time – form another large segment. And let’s not forget the dozen framed posters from the Soviet era that we rescued from being wasted as wrapping paper in the gift store of the hotel where we lived. Each item on our walls has a story. And we love telling them.

Ten times as many women as men are diagnosed with Graves disease, an autoimmune disorder that causes thyroid hyperactivity. Most woman are diagnosed by the age of 40. So the fact that I have just been diagnosed with the disease makes me feel that maybe I’m not really as old as the calendar indicates. Those Scandinavian genes that give me hope that I will live to a very old age seem to be aging me at a slower pace. And that’s not bad.

At my annual consultation last fall, my doctor noticed that my thyroid is not in balance. A routine blood test indicated something was not right, but after a few more tests all that seemed clear was that the two halves of my thyroid, the butterfly-shaped gland at the base of the throat, were not producing at the same rate. Either one half is producing too little or the other is producing too much. He was concerned because a consequence of an overactive thyroid is atrial fibrillation, very rapid heart rate. We already spent a lot of time over the past year talking about my heart.

He referred me to an endocrinologist which led to more blood tests. And last week I got the call with the results. Antibodies in my blood indicate the early stages of Graves disease. This autoimmune disease, likely hereditary, causes my immune system to produce antibodies that act like the thyroid stimulating hormone (TSH) produced by the pituitary gland to stimulate thyroid to produce the hormones needed to regulate metabolism and other systems, including mood.

It seems my immune system is causing at least one half of my thyroid to overproduce. That’s hyperthyroidism. But I don’t have any symptoms of hyperthyroidism. Here they are, from Women’s Health.gov:

Now as autoimmune diseases go, Graves disease seems relatively benign and easy to treat when diagnosed early. At the extreme, the thyroid can be removed or at least stunned into a nonfunctioning state, followed by taking supplements. At the most modest end, taking beta-blockers for a period of time addresses the symptoms and can even knock some sense into the thyroid and get it back on track again. If that doesn’t work, there are other medications that can prevent the production of TSH.

After talking it over with my endocrinologist, I decided to wait another three months before deciding to take any action. In my case, since I have no symptoms, beta-blockers aren’t an option. The endocrinologist prefers to treat the thyroid with radioactive iodine. But right now the over-activity isn’t enough to expect the thyroid to absorb the radioactive iodine. And taking anti-thyroid medication may slow the thyroid activity, but it will likely delay even further the timing for trying the radioactive iodine option. So I decided to give it three more months, then redo the blood tests to see if the over-activity has reached a point when it can be treated, not just hidden.

And since the source of the extra cardiac signal that caused my supra ventricular tachycardia has been fixed, the biggest risk my endocrinologist says I need to worry about now is bone density loss. So I will continue to take calcium and even more Vitamin D instead of adding anti-thyroid medication to my daily regime. Three months from now, I’ll have more information.

Because most cases of Graves disease are diagnosed in women, an excellent source of information is the Office on Women’s Health, U.S. Department of Health and Human Services website and so much of the information there relates to the possible complications during pregnancy. Check it out

Other sources of information: