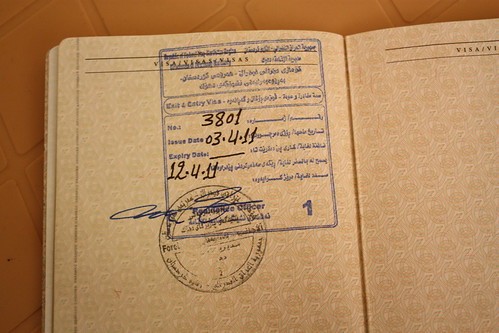 I watched news clips recently of Assistant Secretary for Consular Affairs, Michelle Bond, in Congress being questioned about where the 9,500 people with terrorist connections whose visas have subsequently been revoked are. She couldn’t answer the question. And Congressmen appeared to take delight in having put her on the spot. I’d like to come to her defense with one statement – it isn’t the responsibility of the Assistant Secretary for Consular Affairs or anyone else in the Department of State to know where anyone is once they enter the United States or to take action to ensure the removal of such a person. It is the responsibility of the Department of Homeland Security.

There is so much talk these days about the need to “fix” the vetting process for the issuance of visas of all types, for approving refugees for entrance, and for getting rid of the visa waiver program, but I am concerned that the discussion is based on multiple misunderstandings. I served in two countries as a consular officer – Germany and Barbados – where I only issued non-immigrant visas, including fiancee visas – and it has been a long time since I had that responsibility, so I’ve only cited examples that I know are still processed the same way today.

The simplest type of visa is a non-immigrant visa, but simplest doesn’t mean simple.

First, there are many different types of non-immigrant visas and some of them require additional documentation before they can be issued. For example, student visas can only be issued if the applicant has an I-20 form from the school the student plans to attend. Each school has its own requirements for the issuance of an I-20. When I worked at San Francisco State University, the American Language Institute (ALI) issued I-20s for its students to be able to study English prior to attending college or university.  But having an I-20 in hand still does not guarantee the applicant will receive a visa because of the next condition.

Second, anyone who applies for a non-immigrant visa is presumed to be an immigrant and must overcome that presumption to the satisfaction of the consular officer. There is no checklist. If there were, people who wanted visas would manufacture the evidence called for in the checklist and the decision would be reduced to a matching exercise. Letter from employer to verify the applicant has a job when he returns? Check. Letter from bank to verify the applicant has enough money in her bank account to cover the trip? Check. Letter from a minister/politician/well-known personality to verify what a good guy the applicant is? Check.

Instead of a checklist, a consular officer reviews the information on the application form and passport, including the pattern of travel indicated in the passport, and evidence the applicant chooses to include to demonstrate their strong ties to their home country. If the type of visa the applicant needs requires additional documents, such as the I-20 mentioned for student visas, the applicant must have it and still overcome the presumption the individual plans to remain in the U.S.

Third, there are several types of ineligibilities. Most people who were determined ineligible could still travel to the U.S., but first they must receive a waiver of the ineligibility.

Sometimes the ineligibilities change from time to time. Who does that? Congress, of course, based on the feedback their members receive from their constituents. For example, long before I arrived in Germany to work in the non-immigrant visa section, having been a member of the SS during World War II was an ineligibility, lumped together with membership in the Communist party. Under that ineligibility, there was still a way for the ineligible applicant to travel to the U.S., with a waiver. But just prior to my arrival in Germany, a new ineligibility without the ability to obtain a waiver was added for those persons who participated in the persecution of Jews and others during the Holocaust. Understandable.

Here’s how that played out in one case. An elderly man who had traveled on a visa with a waiver to see his daughter several years earlier, applied again, aware that it would take some time for the waiver to be processed. But instead of that little bit of extra paperwork, we needed now to interview him much more closely to see if his actions as a member in the SS were so abhorrent that he would never be able to obtain a visa again or if he was a “foot soldier” and therefore eligible for a visa, this time without a waiver. That process took so long that he died before we received approval to issue him a visa.

Fourth, in all cases, a security check is also completed before a visa is issued. That check includes derogatory information from all federal agencies. Many times these checks result in even more restrictive processes must be followed, waiting for a specific agency to give the go/no go decision to the consular officer.

Fifth, since 9/11, many additional forms have been added in specific cases, such as a supplemental form for student and exchange visas and detailed travel histories.

Sixth, visas have been made much more tamper resistant than they were in the days I served as a consular officer. Visas now include the digital photo and biometric information of the individual.

That’s for the simplest of the visa types. And it’s just the beginning of the checks and balances.

Let’s just stick with the most basic of non-immigrant visas – the B1/B2 business/tourist visa. If a consular officer is convinced that the applicant’s intentions are consistent with business/tourism and that the applicant plans to return from the U.S. at the end of the stay, a visa will likely be issued. But a visa is not “permission to enter” the United States. It is “permission to apply to enter” the United States. The agency that permits people to enter the United States is Customs and Border Protection (CBP), a part of DHS. If the CBP agent believes the person’s intentions do not match the issued visa, the agent can order a secondary inspection. If evidence is found that indicates the person intended to stay for a longer time or permanently (letters from the family in the United States welcoming him, cards of congratulations from her former colleagues, dozens of suitcases instead of the one or two most tourists bring), CBP can send the person back where they came from. And if that happens, the airline that accepted the person on the flight eats the cost. So even the airlines have a role in determining if the passenger’s visa is appropriate for the trip.

If a person has a valid visa, issued by a consular officer based on the facts on the application and as stated by the applicant, but the applicant was lying and somehow manages to get past CBP, there is still another check. An applicant who arrives on a non-immigrant visa may request to adjust their status to permanent resident or student or temporary worker or au pair, each of which has different requirements. In those cases, a copy of the application is sent to the consular section where the visa was issued in order for the consular officers to determine if there was fraud involved in the application. If the consular section staff provide information to indicate the visa was obtained through fraud, United States Citizenship and Immigration Services (USCIS), another DHS agency, uses that information, along with whatever else they have to determine if the applicant’s status is adjusted or the person is deported.

Discussions including demands that the vetting process be fixed focus on what else must be done. Adding steps to an already lengthy process for issuance of immigrant visas or adjudicating refugee requests will have the unintended consequence of increasing the number of people willing to try to get in without a visa instead of their requests being processed systematically, through multiple agencies. And I don’t think that is what anyone wants.